AlgoWorld is excited to announce a brand new additional series of country cards. 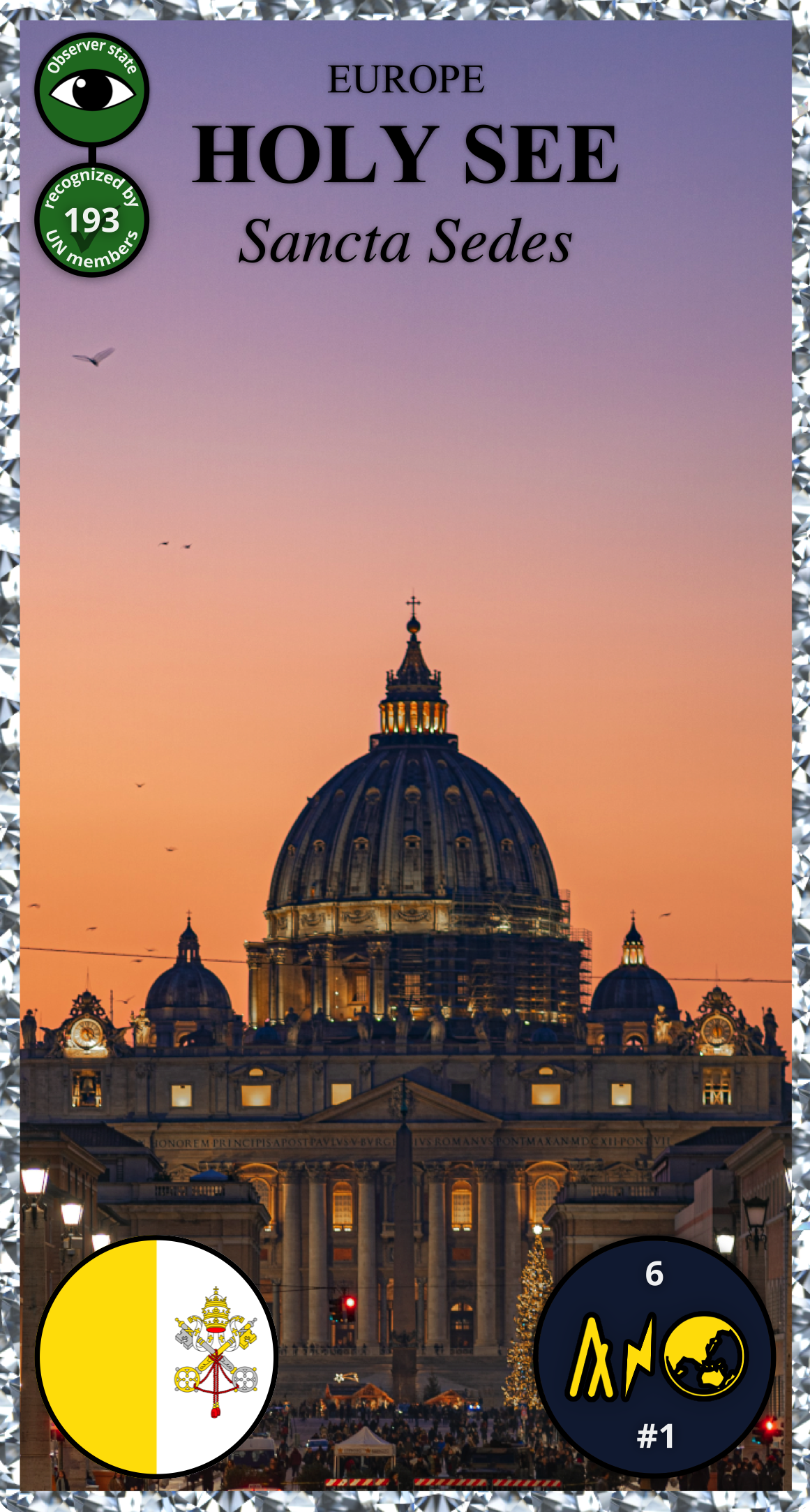 
This series includes 34 cards for 11 states that are not members of the United Nations.

Each state has between 2 and 6 cards, each one based on a different background image. The first card for each state has the famous diamond border!

Excepted the Holy See, which isn’t a UN member by choice, all these states are not UN members because of conflictual situations. This AlgoWorld additional series isn’t a recognition of legitimacy but a way to include these disputed territories and show the complexity of some geopolitical situations.

Stickers on the top left of each card were added to give information about the status of each state:

For instance, Northern Cyprus is not in the United Nations, is recognized by 1 UN member (Turkey) and is claimed by Cyprus.


The 34 cards will be revealed in November and distributed through different means by the end of the month : mainly Discord and Telegram drops, or listings on the AlgoWorld Explorer.

Here are some details about each state of this new series.

The independent papal state of 1,000 people (including the Pope) was created in 1929, but they have not chosen to become part of the international organization.2 Still, Vatican City currently operates in the United Nations as a Permanent Observer Mission of the Holy See to the U.N. The Holy See is the only fully independent nation to choose not to be a member of the United Nations.

Palestine currently operates on a Permanent Observer Mission of the State of Palestine to the United Nations because of the Israeli-Palestinian Conflict and its subsequent fight for independence. Until such a time as the conflict is resolved, though, the United Nations cannot allow Palestine to become a full member because of a conflict of interest with Israel, a member state.

Kosovo declared independence from Serbia on February 17, 2008, but has not gained complete international recognition to allow it to become a member of the United Nations. By some, Kosovo is seen as capable of independence, though it technically still remains part of Serbia, acting as an independent province.

The Sahrawi Arab Democratic Republic, also known as Western Sahara, is a partially recognized de facto sovereign state located in the western Maghreb, which claims the non-self-governing territory of Western Sahara, but controls only the easternmost one-fifth of that territory.

The SADR was proclaimed by the Polisario Front on 27 February 1976, in Bir Lehlou, Western Sahara. The SADR government controls about 20–25% of the territory it claims. It calls the territories under its control the Liberated Territories or the Free Zone. Morocco controls and administers the rest of the disputed territory, and calls these lands its Southern Provinces. The SADR government considers the Moroccan-held territory to be occupied territory, while Morocco considers much smaller SADR-held territory to be a buffer zone.

The SADR maintains diplomatic relations with 41 United Nations states, and is a full member of the African Union.

The Republic of China (ROC), constitutionally formed in 1912, and located primarily in Taiwan since 1949 (resulting in ‘Taiwan’ being frequently used to refer to the state), enjoyed majority recognition as the sole government of China until roughly the late 1950s/1960s, when a majority of UN member states started to gradually switch recognition to the People’s Republic of China (PRC). The United Nations itself recognised the ROC as the sole representative of China until 1971, when it decided to give this recognition to the PRC instead (see United Nations General Assembly Resolution 2758). The ROC and PRC do not recognise each other’s statehood, and each enforces its own version of the One-China policy meaning that no state can recognise both of them at the same time. The ROC is currently recognised by 14 UN members and the Holy See. Almost all the remaining UN member states, as well as the Cook Islands and Niue, recognise the PRC instead of the ROC and either accept the PRC’s territorial claim over Taiwan, take a non-committal position on Taiwan’s status, or sidestep the Taiwan issue entirely. A significant number of PRC-recognising UN member states, as well as the Republic of Somaliland, nonetheless conduct officially non-diplomatic relations with the ROC, designating it as either ‘Taipei’ or ‘Taiwan’. Bhutan is the only UN member state that has never explicitly recognised the ROC or the PRC. Since the early 1990s, the ROC has sought separate United Nations membership under a variety of names, including ‘Taiwan’

Abkhazia officially the Republic of Abkhazia, is a partially recognized separatist state in the South Caucasus, recognised by most countries as part of Georgia, which views the region as an autonomous republic. It lies on the eastern coast of the Black Sea, south of the Greater Caucasus mountains in northwestern Georgia. Its capital is Sukhumi.

The status of Abkhazia is a central issue of the Georgian–Abkhazian conflict and Georgia–Russia relations. The polity is recognised as a state by Russia, Venezuela, Nicaragua, Nauru, Syria, and Vanuatu. While Georgia lacks control over Abkhazia, the Georgian government and most United Nations member states consider Abkhazia legally part of Georgia, with Georgia maintaining an official government-in-exile.

The region had autonomy within Soviet Georgia at the time when the Soviet Union began to disintegrate in the late 1980s. Simmering ethnic tensions between the Abkhaz—the region’s titular ethnicity—and Georgians—the largest single ethnic group at that time—culminated in the 1992–1993 War in Abkhazia, which resulted in Georgia’s loss of control over most of Abkhazia and the ethnic cleansing of Georgians from Abkhazia.

Despite a 1994 ceasefire agreement and years of negotiations, the dispute remains unresolved. The long-term presence of a United Nations Observer Mission and a Russian-led Commonwealth of Independent States (CIS) peacekeeping force failed to prevent the flare-up of violence on several occasions. In August 2008, Abkhaz and Russian forces fought a war against Georgian forces, which led to the formal recognition of Abkhazia by Russia, the annulment of the 1994 ceasefire agreement and the termination of the UN mission. On 28 August 2008, the Parliament of Georgia declared Abkhazia a Russian-occupied territory, a position reflected by most United Nations member states.

The South Ossetian Autonomous Oblast, established by Soviet authorities in 1922, declared independence from the Georgian Soviet Socialist Republic in 1991. The Georgian government responded by abolishing South Ossetia’s autonomy and trying to re-establish its control over the region by force. The escalating crisis led to the 1991–92 South Ossetia War. Georgians have fought against those controlling South Ossetia on two other occasions: in 2004 and in 2008. The latter conflict led to the Russo–Georgian War of August 2008, during which Ossetian and Russian forces gained full de facto control of the territory of the former South Ossetian Autonomous Oblast. In the wake of the 2008 war, Georgia and a significant part of the international community regard South Ossetia as occupied by the Russian military.

Artsakh (formerly known as the Nagorno-Karabakh Republic) declared its independence in 1991 (roughly at the same time as Azerbaijan itself when the Soviet Union fell). It is recognised by three non-UN members: Abkhazia, South Ossetia and Transnistria

Somaliland declared its independence in 1991. It claims to be the successor to the State of Somaliland, a short lived sovereign state that existed from 26 June 1960 (when the British Somaliland Protectorate gained full independence from the United Kingdom) to 1 July 1960 (when the State of Somaliland united with Somalia to form the Somali Republic). It is not officially recognised by any state, though it maintains unofficial relations with several UN member states and the Republic of China.

Transnistria (officially the Pridnestrovian Moldavian Republic) declared its independence in 1990. It is recognised by three non-UN members: Abkhazia, Artsakh and South Ossetia.